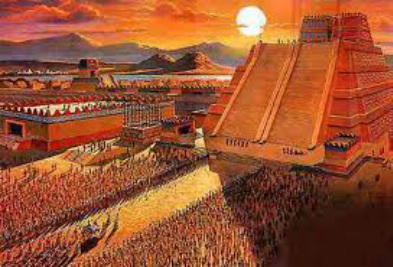 Authentic leaders are emerging and speaking out against the atrocities and dire circumstances in Aleppo. Situations in Syria and the Middle-East are also proof of a rising of confusion. There is also widespread uncertainty as President-elect Donald Trump meets with a wide variety of CEO’s before coming into office on January 20, 2017.

Currently, people are waking up, taking notice and many are starting to take action. A new generation of authentic leaders, with a New Leadership DNA, is emerging

The question is: What can we expect the outcome to be?

History has a way of repeating itself and we can find some answers by learning valuable leadership lessons from ancient history.

The Aztecs were a warrior nation that arrived in the valley of Mexico during the 13th century AD. History and legend reveal that they came from northern Mexico and called themselves Mexica. That term later changed to Aztec. However, according to records, the Mexica were led to the valley by a spiritual seer, called Tenoch[1]. It was revealed to him in a dream that he and his people must continue wondering until they come to a place that they would recognise when they saw an eagle flying with a serpent in its beak[2].

At the time of their arrival in the valley of Mexico, it was largely filled by a great lake. They also discovered that the surrounding land was already occupied by five other tribes. As these tribes were not keen on giving up their land, they all came together, conferred, and arrived at a solution. They would solve the problem by giving the Aztecs an uninhabited island in the middle of the lake. Here the Aztecs could settle, if they so pleased. However, the natives of the area knew that the island was infested with poisonous snakes, which they hoped would take care of their Aztec problem[3].

When Tenoch and his followers went out to the island, they saw a great eagle grappling with a serpent in its beak. This was the sign for which they had been waiting. Delighted, Tenoch declared that this was the place that he had been guided to look for in his dream. The snakes posed no problem to the Aztecs, for where they came from these were considered to be a great delicacy. Very grateful for their new home and with a well-stocked larder too, the Aztecs accepted the offer of the island and began building a new city, called Tenochtitlan, after its founder.

Within a very short time, the Aztecs flourished and became the dominant tribe in the valley of Mexico.  They built many bridges, not only spanning the island they inhabited, they also built bridges spanning different values, different people, nations, life-styles and belief-systems.  Integrating with their neighbours, they formed a very powerful nation with Tenochtitlan as the capital. They united with the people of the Valley of Mexico, who taught them much about their religious beliefs and customs. For a while, they all lived in peace and prosperity.

To the northwest of Tenochtitlan lived the Toltecs, who were a blood-thirsty race. As part of their solar religion, they carried out human sacrifices on a regular basis. Over time, the Aztecs became alienated from the values and guidance once instilled by Tenoch and his followers, and adopted the same superstitious beliefs. They even took these customs and beliefs to absurd lengths. Under the leadership of Montezuma ll, the then king of the Aztecs, human sacrifice and especially the removal of still beating hearts, soon became the central mystery of their religion.

Silently, the younger Aztecs also encouraged rebellion among their subjects. It gave them the excuse to send in their army to take prisoners that provided them with a constant supply of human hearts to offer to the sun god. They believed that by doing this, they were feeding it with its favorite food – human life-force. Not only were they bloodthirsty, but they also worshiped a blood-thirsty god. According to these ancient beliefs, the blood-offerings ensured that the sun rose every day.

Historical records reveal that, for the consecration of Tenochtitlan’s main temple alone, some 20,000 victims were sacrificed. It is estimated that at least 50,000 unfortunates were sacrificed each year. All this would have been a terror to their spiritual leader Tenoch, had he lived to see it. Many of these depictions look very similar to what is currently occurring in Aleppo, Syria and the Middle-East.

The result of blood-shedding, fear and hate

Needless to say, the Aztecs, under the leadership of Montezuma ll, became greatly feared and hated by all the neighboring peoples of Mexico. Their only hope was that the long-awaited god-king, would return. It had been prophesied that this man, Quetzalcoatl, would reclaim his kingdom and set them free. As their only hope, the people kept this ancient legend alive. It was with some trepidation that Montezuma ll, heard that men with beards and white faces had arrived in his kingdom. This occurred in the year of the Reed – exactly the time predicted this arrival would occur.

On 4 March 1519, Hernan Cotes, with 11 ships and 600 foot soldiers, 16 horses, and artillery from Spain, landed on the coast of Mexico. He immediately started taking possession of the cities and the land. During a campaign lasting little more than two years, Cotes completely destroyed the Aztec empire. By the end of 1521, one of the richest countries in the world, which had up until that time been totally unknown to Europeans, became a province of Spain.

Today, the flag of Mexico still contains the symbol of the eagle with a rattlesnake in its beak, as a remembrance of these times.

The Aztecs are but a vague memory and part of ancient history. They lost the battle because their survival as a nation was totally dependent on the quality of their leaders, and the kind of leadership they were subjected to.[4] Their visionless, ego-driven, blood-thirsty leaders let them down.

From ancient history until our modern times, we find that leaders and their leadership styles can make or break a country and nation.

What can you do now?